↓ Skip to Main Content
Home › Discovering tarot › Where to begin

“To understand any Science, Learn the ABC of that science before you try to ascend to its summit.”
– Paul Francis Young-

The ‘where and how do I begin’ is the most occurring question when we have decided to take the path of learning and working with tarot cards.

My experience and suggestion is: get the deck. Go browse the google images or search Youtube videos reviewing different decks, to see if anything clicks with you. Vast majority of the tarot decks available are based on the Rider-Waite system and symbolism.

The Rider-Waite deck, illustrated by Pamela Colman-Smith (originally published 1910) is one of the most popular tarot decks and -systems. I call it the “skeleton of the tarot” because vast majority of the other decks out there are built over this system and have just different appearance, the core, the skeleton is the Rider-Waite-Smith still.
So it’s a good way to start with this deck so you can get to know it, as many other decks (I dare to say that over 90% of the tarot decks) out there are based on the same symbolism, system and idea.
You don’t have to like the deck (I have noticed that so many are shying away from the basic RWS imagery as unattractive and too ordinary), but it’s good to have it as a comparison and learning deck. This deck being the basis of the nowadays tarot systems. Like I mentioned before: the skeleton so to speak- upon it you too can start building. Forming the face for the tarot that is unique to you. But without the basics, the skeleton- it’ll be much more complicated.

The other, also a very good (maybe even better) way to learn the cards is to get a coloring book featuring tarot cards and start coloring the cards one by one. You can use and/or get the coloring book HERE
OR if you enroll to my BEGINNERS Tarot Course (I will suggest you to download and color the cards as a part of the course as well, just saying).
This way, by coloring yourself into the world of tarot, you will be noticing a lot of details, your understanding and intuition will grow as you color each card. This is what I did. I was not connecting with the imagery of the Rider-Waite-Smith deck but when I made my own cards- a whole new world of details and understanding opened up for me. 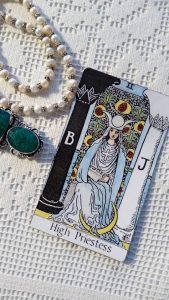 Here’s the High Priestess card from the Rider-Waite deck I colored myself.

And there you go, you have started your journey into the world of tarot.

If you have any questions: I’d be happy to answer them 🙂
To enroll to one of my classes go to: LINK

To browse for Tarot decks go to: LINK